The club quite rightly puts it's success down to being a great place to meet fellow enthusiasts and undoubtedly make new friends. 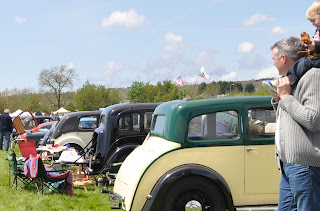 On runs be prepared to drool over concourse winning owner restored early Cortinas, a vintage  Roller or two and a handful of pin-up Jaguars. We are definitely not elitist though, the less exotic but equally cherished populous transport from childhood memories also bring a smile to the face of all who see them. 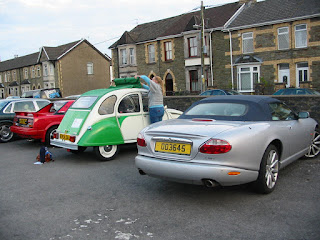 The SWCCC also appreciates classic of the future and welcomes owners and their cars. In fact it is not necessary to own a classic to be an active member of the club, we will always offer an outlet for your enthusiasm.

How It All Began ( The following article was penned in April 2013 as a tribute to the first 30 years!)


For those of you that are not aware 2013 is the 30th anniversary of the South Wales Classic Car Club.  The Editor of the club magazine Glyn Bryan recently asked me if I would write up an article for the magazine to record exactly how the club was first established, and indeed how it was formed and came to establish itself into in my opinion the leading and major Classic Car Club of South Wales.

1983. Thirty years, I simply cannot believe it is thirty years, they say that time flies when you are enjoying yourself and it sure does; and I must say that both Janet and I have had a huge amount of enjoyment in being members of the SWCCC. Thirty years worth!


It all really started the year before the club was formed, when attending some Classic Car Shows during the summer months of 1982; I was approached by a couple of friends from Porthcawl namely, John Handleigh and , we chatted about the need and the possibility of forming a Classic Car Club in the Bridgend area. There were very few Classic Clubs at that time, a couple were The Swansea Historic Vehicle Club and The Historic Motor Federation of Cardiff nothing in the Bridgend area.  The only other type of clubs at that time were motor sport type clubs, covering rallying, auto cross, production car trialling etc, I was at the time still on the committee of the Bridgend Automobile Club of which I had been a member since the mid sixties and still occasionally competing on the odd events, rallying and autocrossing, but I had for a number of years been getting more and more into the fast growing classic car scene. The classics I had at the time were a 1946 Morris eight series E, a 1963 Austin A35 countryman estate car, and a 1961 Ford Popular 100E.


John, Phil, myself and a few others all agreed there was a definite need in the area for a new club, and at The Morris Register Meeting at Dyffryn House held in May 1983 The South Wales Classic Car Club was first formed.  (A couple of photos of that very event enclosed).  I think that I am the only original continuous member left from that first day, I still retain my member number 9, and I believe there were just ten members signed up on that first day. The only other member of the club who has been a continuous member from the first year it was formed is Vaughan Jones who is member number 11.  I think I am right in saying that joined at the very next show we attended. Another early long time member is Paul Arnold number 14 who is still a member, but unfortunately not continuous as he did not subscribe for a couple of years, but then rejoined a few years later.

Phil and John wanted me to go onto the committee from day one, but I was already on a number of committees in the locality and managed to stay off the committee for the first couple of years, but helped out with everything the club decided to take part in.

The very first club meeting venue was the old council room above the Prince of Wales Public house at Kenfig village just outside Porthcawl. Before very long the club had about 100 members and we were holding two meetings a month one at The Prince of Wales and another at the Gwealod y Garth Inn just outside . I used to attend both meetings; this went on for a couple of years, but was not very satisfactory as it was becoming slightly disjointed. By this time I was now club chairman on the committee and I negotiated the move to a new meeting venue at The Bridgend Police Social Club where we had just the one meeting each month.  We spent many happy years at this very comfortable and ideal venue with excellent facilities and good safe parking until the social club closed down some years ago.

The SWCCC soon became a huge part of both my and Janet’s life and there were times when I thought it really was taking over. Janet was very supportive of my enthusiasm for my hobby and gave me all her help and support for the twenty three years that I was chairman.

For the first couple of years that the club was formed we did not have our own Classic Car Show as we could not afford the initial outlay to put one on. I was also chairman of the Coychurch Village Association at the time so I invited the club to attend the annual village carnival (photos) as a special attraction.  This was fine for the first couple of years, but we really wanted to have our own show, so in 1986 we had our very first show at the Dow Corning Sports and Social Club ground at Sully near Barry.

I can remember us going into the first show with just £6 in the club bank account and I stood as guarantor in case we made a loss due to possible inclement weather; luckily the weather was good and the show made a small profit; the second show the following year again at Sully, it poured down just about all day and we all had a good soaking, Oh what fun!


Another thing I foolishly remember doing before the club had any funds in the bank was that I paid for the first batch of metal club car badges, (photos of the full range of car badges). I remember they cost £11 each at the time, and after the initial rush of sales it took forever to sell them all; therefore it was a long time before I had all my money back. They were sold at cost price and every time we sold one I was repaid one at a time! As I mentioned the second show was again at Sully,  but we realised we had  outgrown the field and facilities, so in 1988 moved the annual show to our monthly meeting venue at the Police Social Club grounds at Bridgend. We went on to enjoy a further five shows at The Police Club and once again found that we had outgrown the grounds.


I had a meeting with the then Principle Mr John Thomas of what was at the time known as The Pencoed Agricultural College; it was agreed that we hold our annual show at the college grounds, and I’m happy to say we have enjoyed the past twenty one years at this venue, missing just one year due to the foot and mouth epidemic, so that year Janet and I organised two fund raising events at our home, a cheese and wine evening and a B.B.Q. with the help of a couple of club members.


Over the years we have seen some quite remarkable characters come and go, and some unfortunately pass away; it would not be fair to mention some and not others, but, there have been some excellent hard working members of the committee and ordinary club members. The club would not have survived as it has without them.


As the years moved on the club went from strength to strength and financially we found that we could start to make substantial donations to local charities, the main charity that we adopted was Bobath Cymru later to be renamed Bobath Children’s Therapy Centre Wales. I am happy to say that we are still donating to Bobath as our main charity and would recommend that you call into the centre at Whitchurch to see the wonderful things they do for the children of who suffer from cerebral palsy; just mention that you are a member of SWCCC and you will have a wonderful welcome.  A couple of other charities we have been involved with long term are Heronsbridge of Bridgend and The Sunday Club of Cardiff and of course many, many other charities have benefitted from the many thousands of pounds donated by the club over the years, all of which we can be very proud. I have always said that it is marvellous to be able to help those less fortunate than ourselves whilst we are enjoying ourselves pursuing our hobby of classic cars.


Over the years the club members have attended many hundreds of static shows, several classic tours both in this country and abroad; for many years the club used to organise tours over to to some of the many shows or classic car runs over there. We also organised tours to The Kettering Classic Car Club Shows in Northamptonshire due to our friendship with Derek and Pat Farr, also to places like and many other areas in and . Going hand in hand with all this some members have been lucky enough to be able to take part in other tours with other clubs to countries further afield i.e. France, Germany, USA etc. it just shows what a wonderful hobby we have with the classic car movement, and long may it last.


We have enjoyed some wonderful times with SWCCC over the years not only car shows and tours but many other social type events such as dinner dances, treasure hunts, barbeques, coach trips to motor museums such as the Haynes Museum, the National Motor Museum at Beaulieu also the National Museum at Gaydon, the Coventry Museum of Transport and other major events for example, the great Dorset  Steam Fair, the Enfield Pageant of Motoring, also the Bromley Pageant of Motoring and I’m sure many more I have forgotten about!

Among my huge life time collection of all types of motoring memorabilia I still have every club magazine (The Dragon Wheel) also every show programme for every show also every show plaque and every club badge the club ever produced, also I have some of the original letterheads, and even an original club sweatshirt (no it doesn’t still fit) in all probability it would be the most complete collection of SWCCC memorabilia (I would like to know if there is anyone else as mad as me).


I would conclude with wishing the club a happy 30th anniversary and wish it well for the future. I think there will have to be certain changes to encourage the younger generation to become members and, to take on the many tasks that are now getting too much for the mainly aging membership. 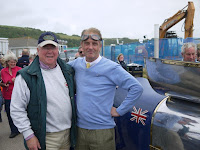 Well done SWCCC I wish you well for the next 30 years.


With best wishes for the Happy Thirtieth Anniversary.